I’ve been thinking a lot about Wordsworth’s sonnet “Nuns fret not” for the last three weeks, usually around 4:30 in the morning (4:38 to be exact). I’ve especially been thinking about “the weight of too much liberty” moment near the end of the poem. I’ve been thinking about weight and liberty in my writing lately—what it means to choose a specific kind of book project and what it could mean to let that go. 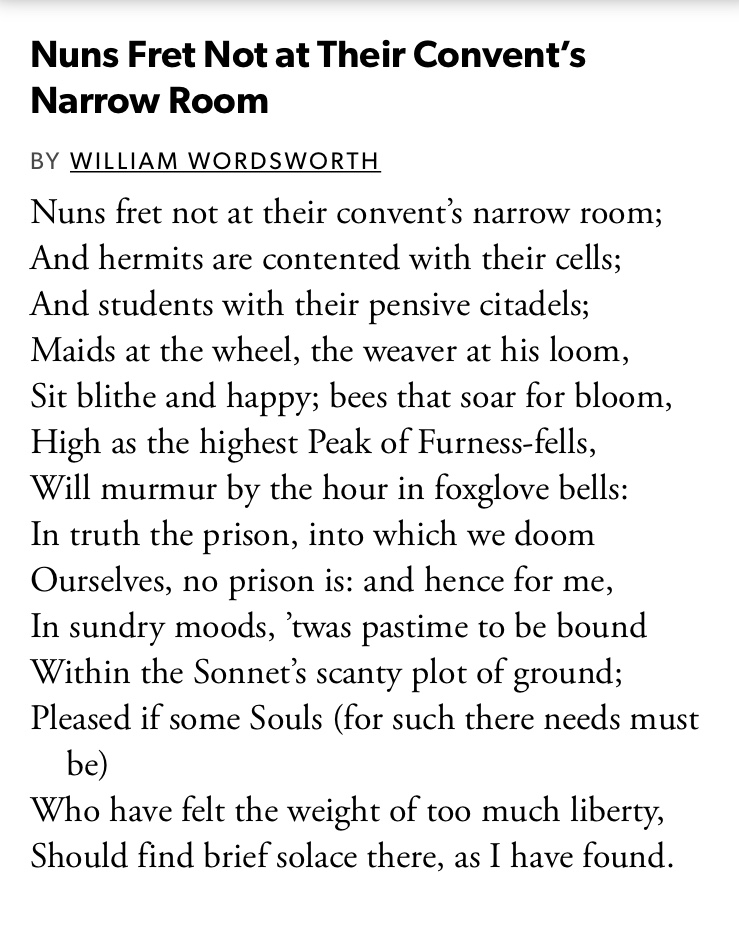 This moment is an interesting/unnerving chapter for me. It’s interesting (and exciting) because Written/Unwritten is taking me to places and into conversations that feel so meaningful to the work faculty of color want to do. I really couldn’t have asked for a better first year with it, and I think it will continue to do good working going forward. I know people will want to talk about it more, and I’ve figured out a good way for those conversations to be useful for faculty of color and people who really want to be their allies. But it’s also been unnerving. I’ve felt this (mostly) internal pressure to make sure it doesn’t eclipse my British lit. work. I love nineteenth-century literature, and writing a book about it actually feels quite timely to me as I see the U.S. in a very particular cultural crisis, especially as I follow the tensions between black women and white women who claim to be their allies. It feels to me that the tensions of women’s studies feminism has spilled into national discourse and debates at the same time that black artists are using the tropes unique to eighteenth and nineteenth-century culture to push back against racist structures.

It will sound impossibly earnest and quite yawpish (in the “Dead Poet’s Society” sense of the word), but I feel I MUST write this book, and I can’t wait to write it. I had a conversation about it a few weeks ago, and in the notes I took to prepare for the meeting the first thing I wrote was “I want to write a book that everyone wants to read.” I’ve never felt that way before. I didn’t even feel that way about Written/Unwritten. I did that book for black women and other faculty of color (not a strategy I’d recommend, by the way), and it’s been because of the grace and openness of a lot of people who saw a broader community for it that it’s being read so much beyond the original audience I imagined.

I feel this book differently and babble about it (that’s the only word for it) to my friends and colleagues when it comes to mind (pretty much all the time). When there’s no one else around, I talk to myself.

Then, in the middle of a long week in Texas, I had an invitation to write for a publication I admire and longingly read. I’d given a talk in Denton Wednesday and was sitting in a hotel room in El Paso on Thursday, putting the finishing touches on a conference paper while trying to revise the book proposal, when the invitation showed up. I knew pretty instantly what I wanted to write about but also was sad to realize I will always have to choose between two modes and, as I’ve come to understand, two audiences. The invitation didn’t come from an academic journal, and so I was almost tempted to put it on the back burner. Almost. I decided to fold it into my writing schedule even as it meant I was keeping up this tug-of-war about my voice and some “audience.”

This has me thinking more carefully about the discipline of writing and how academic writing disciplines me. By this I don’t mean the intellectual back -and-forth between peers asking one another good, if sometimes tough, questions about the work we do; I am talking about the discipline that demands a certain performance of an argument.

So in the middle of this process, in this prison I’ve embraced, I’ve been waking up at 4:38 in the morning, wondering about how I write and for whom.

The proposal I ended up with was a disciplined one, but when I was asked if the book in the proposal was the book I really wanted to write I was stunned by the ferocity of my ”no!” And surprised by how little I’d understood my own ambitions for this book. If you’ve met me, you know that lack of confidence is not something I seem to struggle with, but if you know me you know I don’t always trust that what I want to say or write a) actually needs to be said or written and b) that I’m the person to say or write it. This can be a good thing if it keeps me from being strident or glib. But it was getting in the way of my vision for this book.

So I went back to the drawing board. I mean that almost literally. I got out a piece of white paper and drew boxes and then arrows and phrases and then pulled prose out of that. I’m still doing that. It’s been harder to restructure the book, but I think that’s mostly because I’m in such a hurry to write it. I’ve also learned that the Written/Unwritten work is so outward facing that I really need the kind of internal, more quiet work of this book—reading archival notes, thinking about images, figuring out the textual habits of abolitionist writers. After a public talk on Written/Unwritten I really just need to sit in a café with a pencil and paper and notes.

What I thought I needed to work out is what it means to write for my discipline, and then, as I was scratching out notes about why Austen may have been wise not to write more explicitly about the slave trade, that writing 101 command “write what you know” came to me, and I wrote a note to myself: “write how you know.” What I should have written is “write how YOU know.”

It’s a pretty terrifying thought. A whole book writing how I want to write sounds lovely. I’m not even sure what this means or if this is what we all do, and it just feels important to me because my second book will be my first in some key ways. So I don’t know.

So we’ll see. I spent the better part of two days just staring at a book cover and jotting down what it shook loose in my brain. I’ll start reading again soon, but I’ve been seeing what comes to me unprompted by the discipline. I’m curious to know what I’ll pull out of these last years of reading, teaching, and talking about British abolitionist lit. I’ve already let go of the disciplinary boundaries of “R”omanticism because they’re not really useful for the trajectory of this book. And I’m less interested in the chapter structures I was raised to emulate. I’m curious to spend time this week looking at the discipline proposal I originally wrote to see what is packed in there that might be buried under the performance of my arguments. I found “brief solace” in this performance, in this discipline proposal, and it is written in a way that I write, but it’s not necessarily written how I write. That’s the turn I’m planning to make.

Recent Posts: Written/Unwritten: Diversity and the Hidden Truths of Tenure

I’ve been working with a small group to come up with strategies that will help faculty and their institutions respond to challenges to academic freedom.  These challenges aren’t particularly new, but things move at the speed of Twitter, and so these challenges have increased and seem to follow a pattern, a professor (often but not […]

I mean it is out and about where people can just walk into places and events and buy it I had this cute idea that I would write a monthly update about how things are going with Written/Unwritten—as if the rest of the world would stop just because this book is out in the world. […]

It’s been a busy first month for Written/Unwritten and for me. The official release date was the day before the apocalypse, but even before the publication date response to the anthology have been overwhelmingly positive. At one point in the process of getting the book together I sighed to a friend that it was taking […]

Foundations Responding to the Calling: The Spirituality of Mentorship and Community in Academia Houston Baker, Jr with Ayanna Jackson-Fowler Building a Canon, Creating Dialogue Cheryl Wall with Rashida Harrison Navigations Difference without Grievance: Asian Americans as the Almost Minority Leslie Bow In Search of Our Fathers’ Workshops Lisa Sánchez González Identities Tenure in the […]

Written/Unwritten: Diversity and the Hidden Truths of Tenure is available for pre-order through UNC Press. Buy before June 30th and receive a 40% discount (code 01DAH40).